#Day4 of #16Days takes us to Australia’s Pacific neighbor, New Zealand, Aotearoa in the native Maori language. In 1893 New Zealand’s women earned the right to vote, the first in the world to earn national suffrage, and Aotearoa is considered the fourth most peaceful country in the world, but as recently as 2011 New Zealand had the shame of landing near the bottom of the UN’s list–near the USA–when it came to the number of women suffering from intimate partner violence as well as the rate of maternal mortality. According to the organization Women’s Refuge police are called to a domestic violence scene every seven minutes, and yet the police estimate that only 18% of domestic violence incidents are reported. What that means is that like the US and Australia, one in three women in New Zealand will face abuse in her lifetime.

Aside from helpful statistics Women’s Refuge also provides education to survivors of violence, support for their family and friends, and operate a youth site with the message that real love doesn’t hurt. Their crisis line can be reached at 0800 REFUGE.

As an independent community organisation we work at many levels. From our contact with individuals and families through to involvement with local community and government agencies, we strive to help prevent and stop domestic violence.

Shine–Safer Homes in New Zealand Everyday–te kakano tumanako, also operates a confidential domestic abuse helpline at 0508 744 633. They outline their values and their mission as follows:

Optimism / Whakapono The koru symbolises hope, growth and encouragement for the future

Support / Tautoko victims to be safe and perpetrators to change

Learn / Akoranga from our clients, research and others

Reflect / Maumahara on our experience and develop our practice 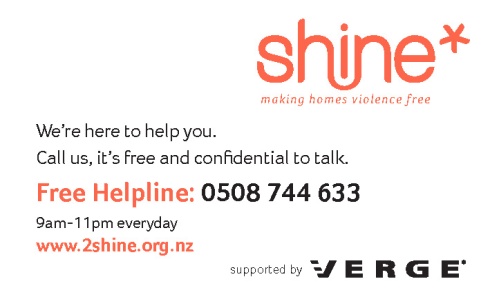 Te Ohaakii a Hine– National Network Ending Sexual Violence Together is another organization in Aotearoa designed to help victims, perpetrators and family and friends of anyone affected by sexual violence. They are available 24/7 at 0800 883300 and their services include: 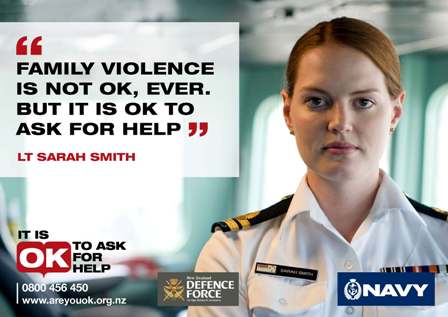 It’s Not OK is a great example of an organization that encourages the entire community to act together to end violence. “Its goal is to change attitudes and behaviour that tolerate any kind of family violence. The campaign’s vision is a community where each person believes there is something they can do to help and is likely to act when they know violence is happening.” In addition to their very interactive website they operate the Family Violence Information Line (0800 456 450).  “It provides self-help information and connects people to services where appropriate. It is available seven days a week, from 9am to 11pm.”

New Zealand, despite it’s small island size and population under 5 million, also has a ton of other great resources like Shakti, specializing in helping families of Asian, African and Middle Eastern origin, 0800 Whats Up, for kids and teens to talk about anything at all, Rape Prevention Education– Whakatu Mauri, working to prevent sexual violence through education, Te Kupenga – the National Network of Stopping Violence, a network or ‘he kupenga’ of 42 independent community-based organisations, the government-run Family Services Directory, and the New Zealand Family Violence Clearinghouse. That’s a lot of resources all with the same goal: safer lives for everyone in their community.