Day 7- Waves of the Women’s Movement in the US First Wave: The first major organized women’s resistance to sexism and patriarchy in the US sprung out of the abolitionist movement. White women who opposed the institution of slavery soon realized that they were also suffering inequalities under the racist, sexist, classist system of government in the United States. The defining moment of the First Wave was passage of the 19th Amendment to the US Constitution in 1920 that gave women the right to vote. The victory of the 19th Amendment came after decades of hard work and struggle, including educating the public with writings by and about (upper-class) women’s status, marches, protests, fasting, and intentional arrest and imprisonment. Unfortunately, the women (and men) who had been working so hard for women’s suffrage in this time could not sustain the momentum of social change, and thus, the next “wave” of the women’s movement would not come for another 40 years.

Second Wave: The Women’s Liberation Movement, or Second Wave of Feminism, came about in a tumultuous time for American history. Women in the US had been on a roller coaster of freedoms and limitations since the First Wave had crashed: the Roaring ’20s brought, for the first time, women’s votes into play, and the advent of jazz culture and the flapper allowed women unprecedented freedoms in appearance and behavior; the Great Depression of the 1930s following the Stock Market Crash was a poignant example of how the feminization of poverty works;WWII in the 1940s brought white women into the workforce like never before; the baby booming 1950s saw that women returned to the domestic sphere to try to achieve the June Cleaver ideal that society demanded; and the 1960s kicked off the Second Wave with the oral contraceptive pill made available in 1961 and Betty Friedan’s surprising (albeit racist) critique of women’s roles in 1963 with The Feminine Mystique. 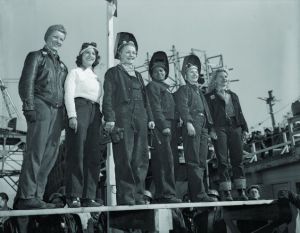 During the 1960s and 1970s organizations were formed that changed the way women viewed themselves and each other but the major victories of the Second Wave came in the form of legislation designed to give women more equal opportunities on par with men, and gave women (at least on paper) autonomy over their own bodies. JFK’s Commission on the Status of Women, the Equal Pay Act, the Civil Rights Act of 1964, the Equal Employment Opportunity Commission, Griswold v. Connecticut, Eisenstadt v. Baird, Title IX, the passage of WIC in 1972, Roe v. Wade, the 1974 Equal Credit Opportunity Act, the 1974 election of Elaine Noble in Massachusetts as the first openly gay person to serve on a state legislature; Taylor v. Louisiana, Nebraska passing in 1976 the first law against marital rape, and the 1978 Pregnancy Discrimination Act are just some of the important legal battles won for women’s equality during the Second Wave.

Important individual or non-legal milestones include 50,000 women participating in Women Strike for Peace in 1961, “Sex and Caste” written by Casey Hayden and Mary King in 1965, the National Organization for Women forming in 1966, the 1968 protest of the Miss America Pageant (which incorrectly coined the phrase “bra-burners”), The National Abortion Rights Action League (NARAL) forming in 1968, Our Bodies, Ourselves published in 1970, the August 26 1970 Women’s Strike for Equality, Gloria Steinem‘s 1972 founding of Ms. magazine and the National Women’s Political Caucus and the opening of the first battered women’s shelter. Sadly the consumerism of the 1980s lead many to believe that feminism was “dead” and no longer necessary. This, combined with the loss of hope after the failure of the US to ratify the Equal Rights Amendment, caused the Second Wave to slowly trickled away.

Third Wave: The relatively few women who were still fighting the good fight in the 1980s became the backbone of the Third Wave. Recognizing that the views presented previously were overwhelmingly homogenous and exclusionary, women of color feminism, womanism and other more inclusive and worldly views of in/equality came to the forefront. Women of color who felt marginalized during the Second Wave began to demand their voices be heard and their opinions valued: Gloria Anzaldua, bell hooks, Audre Lord, Beverly Smith, Barbara Smith, and Cherríe Moraga, to name very few.

The Third Wave is an ongoing process which I am proud to be a part of. The discussion of feminisms can be contentious but for me the simple definition is one who believes in the equality of all people, while recognizing that until and unless (all) women are equal to men, justice cannot be achieved. It is also necessary, however, to fight against racism, ableism, classism, homophobia, ageism, environmental degradation, militarization, and animal abuse. I fully believe in the power of strategic nonviolent action (SNVA) to bring about social justice and equality.

What You can do to Advance Equality:

1) VOTE! Women did not work their asses off for decades so you could forget to make your voice heard on election day.
2) Educate yourself–about the women who made the freedoms you enjoy possible, about your national/ethnic ancestors and their ancient views of women, about the laws that affect your rights as an individual, about strategic nonviolent action, and about anything and everything else!
3) Educate those around you: Tell anyone who will listen what matters to you, what needs to change, and how they can help.
4) Get together: There is power in numbers and “Never doubt that a small group of thoughtful, committed citizens can change the world. Indeed, it’s the only thing that ever has.”- Margaret Mead
5) USE STRATEGIC NONVIOLENT ACTION!

Tomorrow’s entry for International Women’s Day(!) will kick off a week of discussion of women’s use of SNVA around the world while focusing on the women of the recent Arab revolutions.