I have to admit that I am somewhat ambivalent about the death penalty and I welcome any and all arguments for or against it as long as you are civil to each other. Also, most information I have regarding prisons is US-based so any information about prisons from other countries is welcomed, too.

In the United States, the country with the highest documented incarcerations in the world, there are many organizations that are working to reform the prison system as well as some that advocate the abolition of the prison system because of the horrendous conditions prisoners face including rape, injury, illness and even death.

The racism behind the prison system in the US is blatant and damaging to every aspect of society as shown by the Prison Policy Initiative. This list of political prisoners compiled by The Prison Activist Resource Center shows the severity of the impact of racism on minorities in America– roughly 70% of inmates are not white while minorities only make up 35% of the total US population. According to the U.S. Justice Bureau 1 of every 32 adults in the US is either incarcerated (in prison or jail), on parole, or on probation. This number does not include the more than 90,000 children held in juvenile facilities.

Nearly 93% of inmates are male but despite blacks making up only 12.4% of the total population, black men outnumber white men in prison 6 to 1, and most people who are incarcerated have not been convicted of violent crimes. The November Coalition is one organization fighting for the reform of drug policy in the US. The rape of prisoners is one of the biggest concerns of human rights groups such as Los Angeles-based Just Detention International, while such reputable organizations as Human Rights Watch also address the conditions under which prisoners are held, reforming drug policy, and class issues as they relate to inmates. The issues surrounding the use of solitary confinement in prison were outlined in Law & Order: SVU (Season 11, Episode 3). Prisoners of the Census is another organization that fights the immoral gerrymandering of political districts based upon census figures that count prisoners where they are incarcerated rather than where they are from. 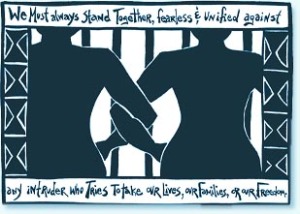 HIV+ inmates make up at least 1.7% of the incarcerated population and face specific challenges and discrimination within the prison industrial complex, including an infection rate of 5-10 times that of unincarcerated people, but some groups do exist within prisons to help prevent the spread of HIV and offer support to those who are HIV+ such as ACE (AIDS Counseling and Education) at the maximum security women’s prison Bedford Hills in New York. Here is a brief history of the fight against the spread of HIV and AIDS within the prison system. LGBTQAI (especially male-to-female transgender) inmates are almost certain to face violence, and rape, while imprisoned. This long piece explores the history of “Queer Encounters in Gay and Lesbian Prison Activism.” 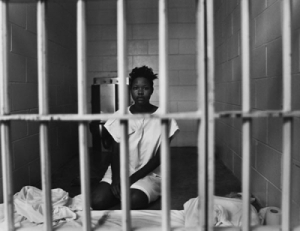 The US drug policy “has become a war on women,” and a staggering 58% of women inmates were victims of violence before being incarcerated. Women in prison face challenges their male counterparts do not, but often their experience is invisible. From these statistics we learn that 60-67% of female prisoners are black or Hispanic in the US, while only 24% of the total US population is black or Hispanic; women are 33% more likely to be incarcerated on drug charges than men; 64% of women enter prison without having graduated high school and women in prison are 12 times more likely to be HIV+.

The health and well being of women is not one of the US government’s priorities, neither are eradicating racism, ending poverty or improving education, therefore it is clear that women in prison may constitute the most vulnerable group in American society as the isms of patriarchy are suffocatingly piled on them.

Jailing pregnant women has recently gotten much press with many women being shackled during childbirth. The Rebecca Project for Human Rights’s Anti-Shackling Coalition has been very vocal in its opposition to this inhumane treatment. The Prison Doula Project is another group working to improve conditions for pregnant inmates. Pregnant women are not only being sent to prison for violating real laws, but are also subject to “pro-life” sheriffs and judges locking them up for potentially breaking laws.

Other activism for women’s rights in prison includes The Advocacy Project which “believes that incarcerating women is an inappropriate and ineffective response to profound social problems such as poverty, racism, childhood sexual abuse, and mental illness,” The California Coalition for Women Prisoners, and the amazing, highly-recommended Women + Prison which also takes on the issue of incarcerating women who use violence against their abusers. All of these inspiring organizations utilize a feminist perspective in their activism. The International V-Day Movement also raises awareness of issues specific to women in prison with productions of the play Any One of Us: Words From Prison and screenings of the film What I Want My Words To Do To You.

In related news, the death of a prominent prison rights advocate in Greece caused an uprising in women’s prisons there. For just a few poignant references to the prison system in pop culture listen to “Folsom Prison Blues” by Johnny Cash, “Locked Up” by Akon, and especially “Prison Song” by System of a Down. If anyone knows any good songs in this light by female artists I would much appreciate a heads-up. To support prison reform (or abolition) and fight for human rights check out any of the organizations mentioned above and consider volunteering, donating, writing to your representative, or even just educating yourself (and those around you) more about this normally-hidden issue.