The Republican War on Women 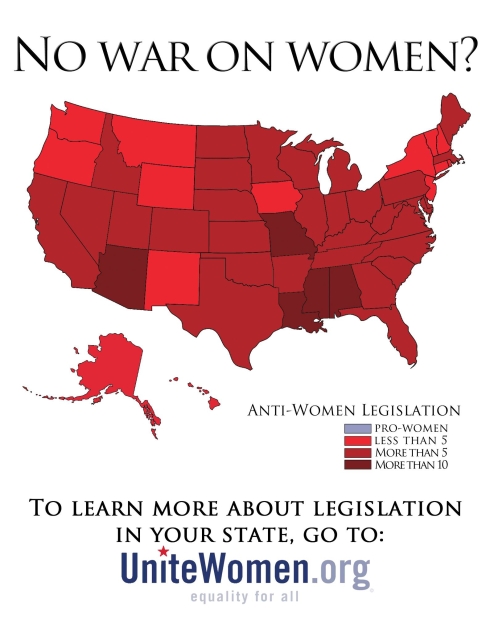 The War on Women being waged in the United States is culminating in the likely closure of the only abortion clinic in the nation’s poorest state, Mississippi. Measures specifically introduced by the state’s legislature to shut down its last remaining abortion provider have been successful so far, with a new law passed requiring abortion providers to have privileges at local hospitals. While the office’s three doctors have all applied for hospital privileges, as of yet they do not have them. It is unknown what will happen to the clinic after the new law takes effect. In Virginia similar measures are being protested that would make it extremely difficult for abortion providers to remain open. This piece explores the painful reality these abortion restrictions inflict on women, an important voice in the conversation when women are not even “sources” for women’s rights issues. It’s high time women were not ashamed to say that they’ve had abortions, and while men’s opinions on everything from menstruation to menopause seem to hold more weight, we in the pro-choice movement would like to hear from more pro-choice men. 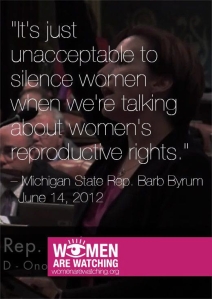 The legislative tactics used by Mississippi and Virginia to effectively make abortion illegal, or at least unobtainable, are nothing new. Across the country a terrifying 1,100 pieces of anti-women legislation have been proposed since 2011! You really should check that link out. Add to this the very real violence faced by clinic workers on a daily basis, like death threats, arson and bombings, and it’s no wonder abortion is becoming impossible to obtain safely and legally in the wealthiest country in the world. Republicans are even trying to sneak language about life beginning at conception into completely unrelated bills, like this one extending FEMA’s national flood insurance plan. But disaster-stricken Americans are not the only ones the GOP is alienating. Not only should women have no control over their own sexual and reproductive health, argue elected Republican officials, their work is worth less than men’s. Extending the war on women to their ability to feed themselves, Republican Senators refused to pass the Paycheck Fairness Act.

From the absurdity of women being excluded from a panel discussing birth control (and the attacks women who wanted to speak endured) to the extremely anti-choice Michigan legislature banning two female representatives for “inappropriate language” i.e.. vagina and vasectomy, during debates about anti-choice legislation, legislators and laws in the US are becoming more and more misogynistic. Beautifully, thousands of protesters took to the… steps with a performance of the timeless Vagina Monologues to demand that freedom of speech extend to female legislators discussing body politics. If you want to send your own message to Michigan legislators sign this petition asking Facebook to allow users to change their middle name to Vagina, then change yours. You might also mention that the double standard– Medicare covers Viagra and penile implants, yet Republicans think birth control should be an out-of-pocket expense– is unacceptable. Thankfully, while the majority of the anti-woman rhetoric in the US is coming from the Christian Rightwing, it’s good to see other religious figures supporting women’s bodily autonomy.

As you can see from the graphic at the top Michigan isn’t the only state waging war on women’s reproductive freedoms. In Ohio alone a staggering 16 pieces of anti-choice legislation were introduced since 2010. North Carolina Republicans are trying to defund Planned Parenthood, again. Texas Republicans are promoting proven-ineffective abstinence-only sexual education courses. Kansas Republicans have introduced a host of Christian-based anti-woman legislation and a doctor there may permanently lose her medical license for refusing to force a ten-year-old to give birth. South Dakota has proposed a 72 hour waiting period between ultrasound and abortion for women seeking to terminate their pregnancies. And in Arizona now it is perfectly legal for doctors to lie to their patients if they think the information they give will influence them to have an abortion. Also in  Arizona, “reasonably suspicious” women and men are being asked for Papers, please, despite a mixed Supreme Court ruling on the legality of SB 1070. This article takes on an excellent exploration of what this means for immigrant women, and what the situation of immigrant women means for equality for all people in the US. Check out the pictures supplied by Planned Parenthood at the end of the post for other evidence of the war on women.

And then there’s the Violence Against Women Act…. The Senate passed a beautiful, sparkling reauthorization of the Violence Against Women Act that extended protections to undocumented women, Native American women and lesbians. The House promptly stripped those additions, leaving millions of women in traditionally under-served populations even more vulnerable, all the while claiming that women would use these new provisions to scam the system with false accusations. The President has vowed to veto the House version if it crosses his desk. LGBT lobbies and Native American women’s lobbies are still pushing for passage of the Senate version at Capitol Hill and even Christian websites think Congress should pass the Senate version! At least New York understands.

With a staggering 1 in 3 Native American women raped in her lifetime one would hope Republicans could at least show compassion in the wake of such terrible violence. But no. A sickening story of a Tampa rape victim who was arrested on charges of outstanding warrants after she reported her rape has outraged women across the country. The worst is yet to come. After being booked, a guard where she was being held confiscated the second pill of her emergency contraception because it went against her beliefs. A federal court has ruled that the victim will be allowed to sue the guard for violating her right to privacy. In other news of the State violating individuals human rights, this (potentially triggering) piece explores the unnecessary police practice of forced catheterization in Utah. Even liberal San Francisco is being accused of victim blaming people who come to the police as victims of rape and domestic violence.

Rape in the US military is a hot-button issue too, yet House Republicans showed little compassion when blocking abortion access for soldiers who have been raped. The award-winning documentary The Invisible War explores the issue of rape that is poisoning the US military. One service member interviewed explained victims’ options as “suicide, AWOL, or deal with it.” The film explores why many rape victims don’t report the incident: for 25% of women who didn’t report the rape to their commander, their commander was their rapist. The documentary’s website, in addition to the trailer and information on the movement, offers ways to take action and help demand accountability and justice for service members who have been raped.

Pillamina on the campaign trail!

Now that I’ve thoroughly depressed you, I want to give you the good news. In addition to the beauty of an estimated 3-5,000 people filling Michigan’s capital steps to respect the word vagina, across the blogosphere people are overcoming the shame of using the word vagina. Like the personal story of abortion linked in the beginning of this post, it is extremely important women are speaking out so that their voices are heard. Public performances, like The Vagina Monologues, have long been an effective tactic in the strategic nonviolent activists’ arsenal, and with Republican Presidential candidate Mitt Romney wanting to “get rid of” Planned Parenthood, a giant pack of birth control pills, Pillamina, is now following him along the campaign trail. If that doesn’t make you smile, how about this: since 1990 abortion rates have decreased 18% for women in their 20s due to increased contraception access. Also, many big city mayors (a lot of whom are men) have added their names in support of women’s reproductive rights. Rock on Seattle, Portland, San Francisco, Los Angeles, Hartford and New York!

And not all news from individual states is bad. The Governor of New Hampshire vetoed a “partial birth” abortion ban since a similar ban (for a procedure which doesn’t actually exist) is already in place at the federal level. Also in New England Connecticut has included abortion as an essential health benefit in the state’s insurance plan. And even quiet Midwesterners in North Dakota are fighting back against this war on women, deciding they don’t want to expand religious liberty to discriminate against anyone. At the federal level Congress actually did something right, by failing to pass a ban on “sex-selective abortions,” a problem which deserves national attention in India and China but is almost non-existent in the US. 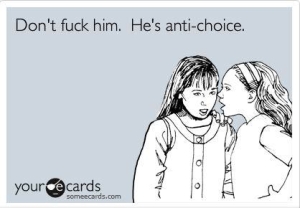 Though the comments on this video are repulsive, the White House 1 is 2 Many campaign to encourage men to speak up if they witness violence against women is a good reminder that bystanders have power too. As we saw with the contentious issue of undocumented women being covered by VAWA, immigrant women are the often-forgotten victims of violence against women. Thankfully the newly opened Tahirih Justice Center in Baltimore is a haven for immigrant victims of domestic violence throughout New England. If you want to get involved and fight back against the misogynistic legislative attacks, including the VAWA embarrassment, check out A is For, a group seeking to reclaim the scarlet letter A. Or join the National Latina Institute for Reproductive Health in their Week of Action for Reproductive Justice because you, like Mary Gonzalez, the openly lesbian Latina doctoral student recently elected to the Texas House, are poderosa.

Finally, the best news of all. In addition to this long, well-cited list of Obama’s accomplishments as President he can now definitively add “bringing American healthcare into the 21st Century: The Supreme Court has upheld Obamacare!!! This landmark decision ensures that women and men will be treated equally by insurance companies, and preventative services like birth control (with no co-pay), mammograms, and pap smear cancer screenings, will all be covered by insurance! If you’re so inclined you can write a letter of thanks to the five Supreme Court Justices who voted in favor of universal health care. Thank you for reading, be well, and as always, if you have ideas, suggestions or comments as to how we can fight back against the patriarchy, please share them below.