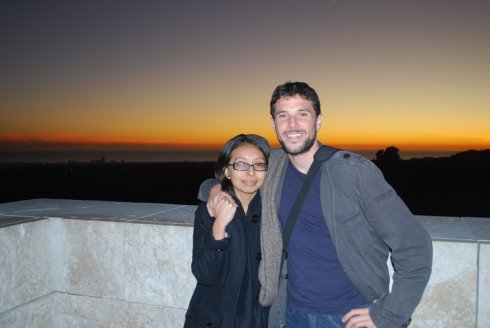 Fabrice and his partner Wendy enjoying the sunset

I must admit that writing about gender issues is not the easiest task I have been given. And it is exactly because I don’t feel comfortable with that subject that I felt it would be interesting to dig a little deeper.

My feeling is that I am not the only one not to be at ease, because in France there is a huge gap between the progressive speeches politicians give to the media and the reality. The reality is that every three days a woman dies because she has been hit by her husband. This year more than 650,000 women reported that they had suffered from physical violences, and in their own home for half of them.

Despite the fact that this is a huge issue, I have to admit that I have never been directly exposed to it in my country. However I am convinced that even though violences against women are of course denounced by most men, they are deep-rooted in the customs of our society that is traditionally, and despite all appearances, still patriarchal and misogynist.

I think that the political arena is in a way a good caricature of our society. The French parliament, for example, is highly dominated by a male presence. Despite the fact that we had some very popular women in politics, most of the previous French Prime Ministers have installed women in their governments (as they had promised strict parity during their campaigns), to later replace them by men.

I am convinced that the lack of female representation in politics, or the difference of salaries between men and women who have the same level of experience and education, are facts that necessarily help maintaining, on one hand, the feeling that women are inferior, and on the other hand, that the place where they belong is at home!

A very interesting NGO (called La Barbe-which literally means The Beard but which is also a phrase that we sometimes say in France to say “That’s enough!”) pointed out that issue through their different actions. The women who work at that NGO went to high political or cultural institutions (such as the Parliament or the French Academy). Their actions consisted of breaking into these highly respected places, in silence, with fake beards. By doing that they pointed out the fact that there was almost no female presence in these institutions and their message was basically “Unless you are bearded there is almost no way you can have a place in these institutions.”

I am conscious that there is a difference between misogyny and physical violences against women. But what I want to point out is that misogyny often ends up justifying these violences.

A few months ago, the head of the International Monetary Fund, Dominique Strauss Kahn, (who was close to starting his campaign for the French presidential elections) was accused of the rape of a hotel maid in New York. There has been huge media coverage over this event in France since this man was seen, by most of us, as the next French president. Therefore, a lot of politicians and journalists started debating over what happened in room number 2806.

Despite the fact that nobody really knew what happened in that room, that “underground misogyny” suddenly came back up to the surface in the words of some politicians and journalists. Even though DSK was accused of rape, one of his political allies (Jack Lang) said that this man should be released because he had paid a large fine and because “He didn’t kill anybody.” It is a way of saying that rape is not a big deal after all, since nobody died.

A journalist called Jean-François Kahn said his impression was that there was no violent attempt to commit rape but that there was an “imprudent action.” He later specified by saying that DSK just lifted the skirt of a servant.

I think that through the DSK scandal, we have clearly witnessed that tendency to put rape into a favorable perspective. This is for me a sign that misogyny is not as innocent as we (men) want to think it is. And part of the solution to violence against women will come from getting rid of that very old-fashioned habit.

Fabrice Gernigon: I started my studies with a Bachelor of Arts in Information, Communication and Cultural Mediation. As I was interested in journalism, in 2007, I studied Political Sciences with a major in “Media, Society and Globalization” at the French Press Institute in Paris. Then I decided to focus my studies on the role of Media in conflict prevention and peace building at the University for Peace in Costa Rica. I later did an internship at the Head Office of UNESCO in Central America, with the Public Information Office. Back in France in 2011 I worked as a news coordinator for a French news channel called BFM TV.