Day 17- Take Back the Night

In the past two days we have seen how ordinary articles of clothing can be catalysts for change, and can help break down barriers by promoting people to ask questions. Any conversation that educates someone as to the gender inequality in a given society or the dangers of gender-based violence is a good one, and Take Back the Night (also known as Reclaim the Night) has been promoting survivors of violence to break the suffocating silence since at least 1975. These events are held all over the world in recognition that women’s rights are still in jeopardy.

The idea behind this life-changing event is for women (and men) to gather together after dark, share their stories of violence, literally light up the night (with candles), and reclaim their right to be in public at night. You can find the history of the event here. TBTN is also a forum for survivors to realize that they are not alone in facing violence.

As an undergrad at SDSU I had witnessed (and marched and chanted slogans in) one TBTN event before I had the courage to take the mic at the second event my sophomore year. I, oddly, have no fear whatsoever of public speaking but standing up and telling the microphone and everyone who was on the other end of it the hell I faced as a survivor of child sexual abuse and incest was terrifying. I felt exposed, like a gaping wound. I tried to fight back tears but as my mother says, sometimes tears are the necessary lubricant for painful words.

Once my story had been told and all of these people, these strangers, now knew that I was a survivor, I felt like a huge weight had been lifted off me, I felt liberated. And everyone at the event touched a caring hand to my shoulder, or hugged me through a layer of their own tears, telling me they felt the same way, and thanking me for telling their story.

Take Back the Night changed my life. It was the first time I ever identified myself as a survivor of incest; a word which still makes my stomach flip and my skin crawl. I participated in the subsequent events on campus throughout my college career but never again felt the need to speak up. Of course, I raised my voice as we marched around campus and “Our bodies, our lives, our right to decide!” has served me well in pro-choice rallies too. 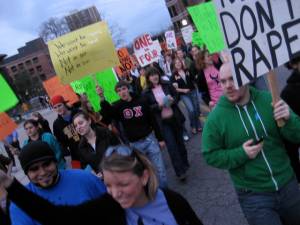 The cornerstone of TBTN is local events where ordinary citizens have the courage to speak up and show that they are sick and tired of being fearful. The TBTN Foundation welcomes submissions of local events and will add them to its national calendar. Normally these rallies are held near the end of April, which is Sexual Assault Awareness Month (and Child Abuse Prevention Month). They are often held in conjunction with a number of other activities including Denim Day and the Clothesline Project.

Many groups and organizations participate in Take Back the Night, including universities, women’s groups, LGBTQAI associations, local shelters, religious organizations, and men’s groups who speak out against violence against women. If you are interested in finding a local event to participate in or volunteer for, or if you want to create an event, go here. If you need help dealing with a violence experience, here are some useful resources.