Since January I and other bloggers from around the world have been writing for the Stop Street Harassment Blog. For me participating in the conversation about street harassment has been a cathartic experience, allowing me to reflect on how I deal with being harassed and how I view the men in my community who are harassing me and others. To bring Sexual Assault Awareness Month to a close, I’d like to leave you now with an overview of the past four months of the Stop Street Harassment Blog. 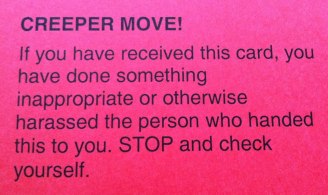 In April I wrote about the clash of sexism and racism when someone is harassed by a member of a different race. Ultimately no matter how many people of any given race harass you, they are still acting alone, and it is crucial that their sexism does not fuel our racism. Rocio Andrés of Spain also explored the individualism of harassers, but delved more into their humanity than I. She reminds us that they too are products of the society that we create, so we must try to continue to view them as human. She urges that understanding street harassers is not excusing them, but it is crucial to learning how we can prevent harassment to begin with. 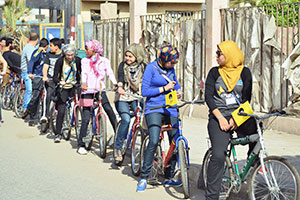 Though February is a short month a lot was written by the Stop Street Harassment Blog cohort. Kriti looked at how using public transportation contributes to women being harassed in Nepal. Rocio contrasted the realities of sexual violence in places like Rwanda and Bosnia-Herzegovina to the good things that are happening to combat street harassment in other places. She wrote about violence in war stating, “We love durings. As if there were neither after nor before.” Powerful stuff that! Pallavi highlighted some of the successful community engagement projects of Blank Noise in India. I dove into the link between street harassment and teen dating violence for Teen Dating Violence Awareness Month. Sandria Washington of Chicago challenged the idea that more crossing guards would reduce girls being harassed on their way to school. Jeanette R. of California talked about racial profiling of men as a form of street harassment.  Joe explored how men can start to realize just how pervasive street harassment against women really is. February started with Andrea Ayres-Deets of San Francisco tearing open the ever-important idea that street harassment limits women’s political participation and participation in strategic nonviolent action.

In January Brittany encouraged everyone from Baltimore to Cairo to Meet Us on the Streets and give voice to the harassment that overruns society. Kriti highlighted the organization Astitwa and its success in changing how Nepali police address street harassment. Katie contrasted the differences between gender-based street harassment and bicycle-based harassment. For the anniversary of Roe v. Wade I wrote about the harassment of women seeking abortions and abortion care providers as a form of street harassment. Rocio explored how things like Scotland’s “Single Woman Policy” are just band-aid solutions to the gaping wound that is sexualized gender-based violence. Finally, back at the beginning, Pallavi reminded us that the streets are not only full of harassment, but in India they are far too often where young women go to die.

I’d like to thank the Founder/Executive Director of Stop Street Harassment, Holly Kearl, for giving me this opportunity to learn and share and grow.

Originally posted on In Women’s Hands, the following post will serve as an introduction to my trip to Bosnia and the amazing friends I made there. 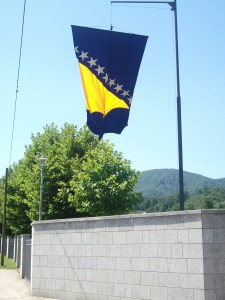 The flag of Bosnia & Herzegovina at the Srebrenica-Potocari Memorial and Cemetery. Photo by Morrarovic Photography

With different goals reached through the use of various tactics in distinct circumstances, it may be difficult to see the similarities in the nonviolent struggles that Leila Seper, Advija Ibrahimovic, and Iltezam Morrar are actively involved in. While their situations are diverse, they are each struggling somehow for the same things: equality and justice. Fighting for justice, in its many forms, is not just an option for these three dedicated women and the activists by their sides– it is a necessity.

The other commonality among them is their age: all of them represent the new face, the next generation of women activists. Skilled in social media, willing to face risks, and aware of the fact that the more people who understand their struggle, the broader impact they will have, Iltezam, Advija and Leila have accepted that changing the world — locally, nationally, and globally — is a daily responsibility. 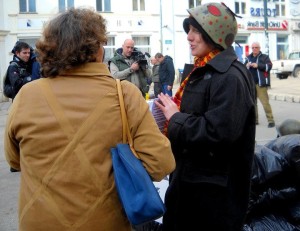 Leila is an expert in using humor to explain Dosta!'s serious work. Photo courtesy of Dosta!

Leila Seper, an outspoken member of Sarajevo’s young and expanding activist community, uses her quirky sense of humor, and the brand recognition of Dosta!, to actively demonstrate to Bosnians of all ethnic and religious groups that they must fight for equality and human rights. An active supporter of worker’s rights, student rights, environmental protections and women’s rights, Leila takes on every challenge with conviction, enthusiasm, and a sense of humor. 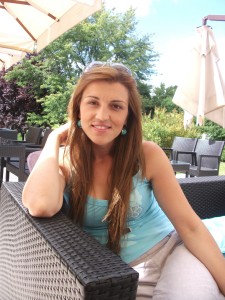 Advija Ibrahimovic, the youngest member of the Women of Srebrenica Association, has learned the skills of successful activism from some of the most seasoned activists in Europe – the Women of Srebrenica. Fighting for legal justice, accountability, and recognition of the horrors that took place during the Srebrenica genocide that left her and her siblings orphans, Advija has also been educated as a nonviolent action trainer by the Alternatives to Violence Programs. Chosen to represent the Association during the 2003 unveiling of the Srebrenica-Potocari Memorial and Cemetery, where she stood alongside President Bill Clinton, Advija’s upbeat, confident demeanor is contagious. 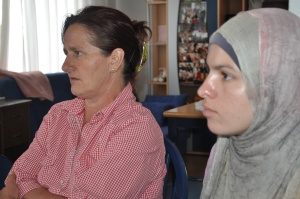 Hajra Catic, President and Founder of the Women of Srebrenica Association with Iltezam. Photo by K. Spangler

Iltezam Morrar, a wise-beyond-her-years medical student from Palestine currently studying in Sarajevo, draws on her family’s long history of nonviolent action in the continuing struggle against the Israeli occupation. Hearing her grandmother, father and uncles tell stories of their nonviolent activism during the First Palestinian Intifada, Iltezam became inspired to join the struggle at the age of 15. Her actions, and those of her fellow villagers in Budrus, quickly became exemplars for the next generation of Palestinian activists following the success of the Just Vision documentary highlighting their nonviolent struggles against the wall.

In the process of learning to identify with seemingly disparate women and reminiscing about nonviolent successes everyone went away with fresh insights and inspiration, as well as new friends. Leila taught us to keep a sense of humor even in the face of injustice, and to work with the authorities whenever possible to reassure them violence is not an option. Advija taught us that persistence pays off, and that even the humblest of citizens has the power to affect international politics when using the right methods. Iltezam too, taught us the importance of tenacity, and the need for clearly stated objectives when battling a much stronger opponent. 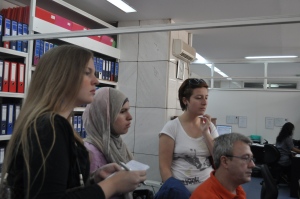 Leila, Iltezam and I watch as the International Commission on Missing Persons makes a positive DNA match to a fragment of remains found in a mass grave from the Srebrenica Genocide. Photo by K. Spangler

Each woman came away from our gathering with something different. Leila explained, “I get motivation from these meetings, when I see their [Women of Srebrenica] strength to fight.” Advija agreed, “You have to be determined. That’s the example for me.” Iltezam summarized everyone’s feelings in her own way, “I’m honored to be here to learn from these women.They are so strong, and we have so much to learn from them. They never give up.”

Our meeting proved to be a unique opportunity to learn, share and grow, and the inspiration from each woman’s struggle is sure to be a source of strength for each of us for years to come. And that’s exactly what we hoped for.