As October draws to a close the observations of my friends and co-workers are ringing in my ears: cancer is a by-product of life, and we should be focusing on things we can prevent, like domestic violence. Most people are unaware that in addition to being Breast Cancer Awareness Month, October is also Domestic Violence Awareness Month, hence why there are so few purple ribbons to be seen amongst the sea of pink, but purple goes with your pink ribbons just fine. 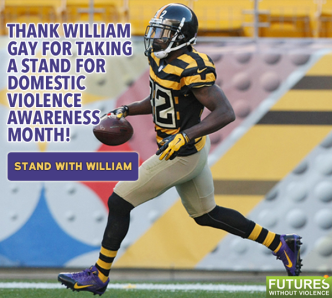 Obviously no one likes cancer and my friends are no exception, their respective points though–that death is an inevitable part of life and that we should try to heal social issues with social action rather than medical issues with social action–challenge the accepted social norm that causes even burly NFL players to don the “feminine” color pink so that more women will detect breast cancer early. Nevermind that men can and do get breast cancer too…. Despite the NFL’s Crucial Catch Program, there’s a stark contrast between pink-supporting players like Johnny Manziel who recently avoided any legal or NFL discipline after police dash-cam footage showed him schmoozing away a domestic violence incident, and pink-resistant players like William Gay who was fined for wearing purple cleats in honor of his mother who was murdered in a domestic violence incident when he was a child. Thank Gay for his brave action here. 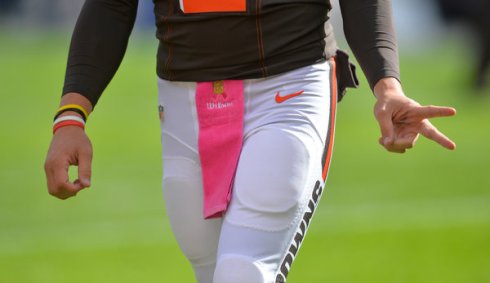 The truth is breast cancer kills an estimated 40,290 women and 440 men in the US each year, while 1.3 million women and 835,000 men each year are victims of physical intimate partner violence. Lung cancer is the deadliest form of cancer by far, killing more people every year in the US than colon, breast and prostate cancers combined, but Lung Cancer Awareness Month (November) is barely a blip on our collective media radar. Maybe breathing just isn’t sexy enough.

Don’t get me wrong, I’m not saying mastectomies fit into the mainstream ideals of sexiness either… but oh those reconstructed breasts! And there’s nothing wrong with public awareness campaigns for any serious health issue, the problem I have with BCAM is the pinkwashing–claiming to care about breast cancer while selling/promoting products that are carcinogenic.

Breast cancer survivor Barbara Ehrenreich explains in the documentary Pink Ribbon, Inc., “‘We used to march in the streets. Now you’re supposed to run for a cure. Walk for a cure, or jump for a cure. The effect of the whole pink-ribbon culture was to drain and deflect the kind of militancy we had as women [who] were appalled to have a disease that was epidemic, yet we didn’t know the cause of.'” 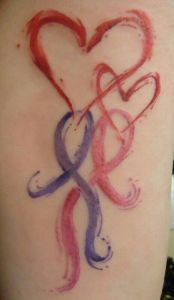 Understand the history of the Pink Ribbon and its campaigns, and Think Before You Pink. If you truly want to make a difference in the lives of the 1 in 8 women who will develop breast cancer, try this:

If you want to make a difference in the lives of the 1 in 3 women who will face domestic violence in their lifetimes:

Many words describe me but none more so than activist. I am dedicated to equality of all people and have a special focus on gender issues including reproductive justice, sexual violence, and strategic nonviolent action. END_OF_DOCUMENT_TOKEN_TO_BE_REPLACED
This entry was posted on Saturday, October 31st, 2015 at 20:13 and posted in (Dis)ability, Environment, Race/Ethnicity and Activism, Sex/Sexuality/Reproductive Justice, Strategic Nonviolent Action. You can follow any responses to this entry through the RSS 2.0 feed.
« Happy Bi Visibility Day!
Giving Back for Native American Heritage Month »

One response to “Pink & Purple Awareness”