If you’re not already watching Modern Family I hope that I can convince you that it’s worth your time. The family friendly prime time comedy highlights three branches of a modern family through the spoofed lens of a European reality show. No laugh track, no forced audience applause and the occasional deadpan look straight into the camera make for a comedy that is a lot more realistic, and therefore lovable, than other shows on TV. Now, I’m not one to watch a lot of television but from the first episode of MF I saw I was hooked. Of course there are the issues around only showcasing traditionally attractive, nondisabled, (mostly) white folks, and for a long time showing the unrealistic portrayal of families where one parent, usually the women (can afford to) stay at home with the kids, which very much deserve to be addressed, but today I’d like to focus on one of the things Modern Family is getting totally right: its portrayal of the complexities of modern masculinities. I’ll try not to spoil anything if you haven’t seen the show/episodes yet, but no promises.

Jay Pritchett: The oldest member of the family, portrayed by Ed O’Neill of Married… with Children fame, Jay is a “man’s man” who golfs with his buddies, tells fish stories and remarried a gorgeous Latina woman half his age after divorcing the mother of his adult children. Jay is still a member of the old guard when it comes to masculinity, there are some things he thinks men just shouldn’t do, but he has definitely matured through his gradual acceptance of his gay son Mitch and his partner Cam. He rags on his son-in-law Phil regularly but it’s mostly out of love, and sometimes we get the feeling that Jay wishes he could be more like Phil. Jay tends to motivate by raising his voice, gets out of trouble with his wife Gloria by buying her gifts, and shows his family his love by buying them vacations too. Through the five years MF has been on air Jay has learned to show affection, even if it is only to his French Bulldog Stella. O’Neill does a fantastic job bringing to life the struggles of an older man starting over again, trying to get it right the second time around as a (fantastic) step-dad with a new baby in his 50s, and adds heart a the character who has few opportunities to be vulnerable. Throughout the series though we have seen this tough guy cry, sing Gladys Night to his grandkids, be embarrassed and achey and oh so human. Jay Pritchett is a character we all know, and it’s good to see that our influence is boosting his tolerance of the changing world around him. 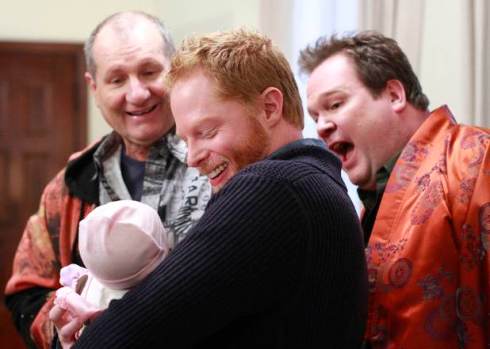 Luke Dunphy: Played by real life genius Nolan Gould, Luke is often thought of as a dumb, sweet kid. He shares many of his father Phil’s tendencies towards invention but is sometimes thwarted by his own criticism. As he’s grown up he has rebelled slightly against the very close bond he and his father shared for the first four seasons, but it’s clear he’s still Phil’s favorite. Some of his harebrained ideas really are quite genius though, like hiding his sister’s college acceptance letter because he’d miss her. As the youngest child in the Pritchett household he is quite independent yet occasionally shows a deep love and need for his family. In many ways Luke is a typical boy/young man, just trying to figure out how to skate by but have fun doing it. He often pairs up with his oldest sister Haley to rib the sister between them, Alex, for being a nerd but is usually grateful for her help with school projects. As he grows up Luke becomes more and more witty. Let’s hope the fact that he’s good with electronics, while academic overachiever Alex can’t even figure out the remote, remains one of the only hyper-masculine pigeonhole he’s written into. In fact Luke actually expressed discomfort with being selected by one of two twins based on physicality alone, but that didn’t stop him from making out with her. I’ll be very interested to see how his character develops as he goes through high school. 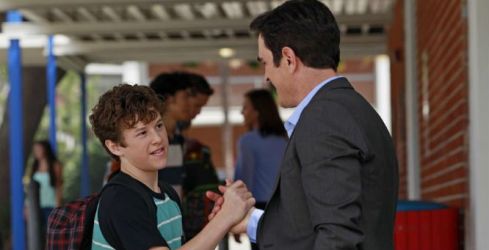 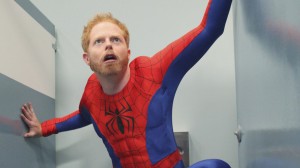 Mitch Pritchett: Mitchell, like his other half Cam, both falls into and extinguishes gay stereotypes regularly. Jesse Tyler Ferguson (a gay man playing a gay man?! *gasp*) brings Mitch to life and makes you want to loosen his tie and take him out for a drink. His high-strung legal mind and organized manner stand in stark opposition to Cam’s flamboyancy and that of their gay friends Pepper, Longinus, Crispin and Jeaux. He has moments of queenliness too though, like when he and Cam ask their daughter “Who wore it better?” or when reminiscing about his childhood days of figure skating. He regularly jokes that his sister Claire is the son his dad Jay always wanted, but over the years they have grown closer through their trials and much of Mitchell’s success can be attributed to the pragmatism and work ethic he picked up from dear old dad. Mitch is the one who holds the family together, not in an emotional rock kind of way, but in a he’ll-make-sure-all-the-paperwork-is-correct way. Although his demeanor is consistently more masculine than Cam’s, because this stands in such stark opposition to the ways society thought of gay men for so long the character of Mitchell is even more challenging to heteronormative ideas of masculinity. He may not be as affectionate or fun as his partner but MF does a great job of showing how much Mitch and Cam rely on each other in myriad ways as they parent together and work to keep the spark alive. Mitch sums up their relationship to the gay community nicely when Cam is trying to figure out a way out of attending a wedding: “We’ll just make an excuse. We could say ‘We’re not going to any more weddings until the gays can get married.'” To which Mitch replies “Oh, now we’re political? We leave town on Gay Pride Weekend because we don’t like the traffic.”

Cam Tucker: Cameron Tucker is a super interesting juxtaposition of superstar jock and star of the musical. Having grown up on a farm in Missouri he’s not adverse to hard work but is comfortable with his partner, Mitch, being the breadwinner. As a straight man Eric Stonestreet has said he based Cam’s mannerisms and demeanor on his mother, and the result has been Emmy Award winning. Even conservatives have learned to love this gay man. From shrieking in a crisis to destroying the kitchen making French toast with his adopted daughter Lily, Cam definitely can fall into the flaming stereotype. But for every instance where his portrayal of a gay man as partner and father is predictable there is a gentlemanly masculine counteraction. And then there’s Fizbo…. From coaching football to directing the choir to “punkin chunkin” Cam is a gloriously complex example of how human traits are pigeonholed into masculinity or femininity. The best thing about Cam, and Mitch, is that they are both aware of their strengths and their shortcomings, so much so that they often acknowledge their need for each other to be balanced. They squabble and diet and get into fender benders and gossip, but both as individual characters and as a couple they are so amazingly human and lovable you always find yourself rooting for them. 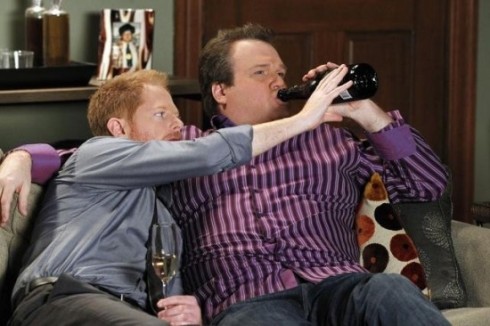 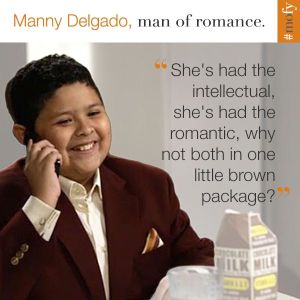 Manny Delgado: Native Texan Rico Rodriguez gives voice to Manuel Delgado, who may be Colombian by heritage–he’s not afraid to wear a poncho to school or play his pan flute–but is mostly just an old soul who’s grown accustomed to the finer things in life. From sipping espresso to writing poetry Manny is a hopeless romantic and started out completely fearless (except butterflies). As he’s grown up his character has realistically become more self-conscious, yet retains all the charm and class he’s always had. Though he’s forgetting Spanish, to his mother’s dismay, Manny intuitively understands things that would go right over most boys’ heads. He’s not athletic, he’s not tough or strong, but he debuts a whole new understanding of what coming-of-age masculinity can look like in America. He’s stylish and sophisticated and just wants to find someone who will love him for who he is. I have high hopes that he will continue to be respectful, insightful and open-hearted. 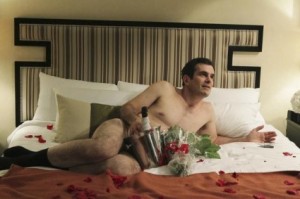 Phil Dunphy: Phil, portrayed by Ty Burrell, is the reason I wanted to write this post. As an affluent, straight, white, able-bodied man he doesn’t sound too challenging to the typical discourse on hegemonic masculinity in the US, but he so is. Phil regularly says things that people interpret the wrong way such as “It’s Luke’s career day. I thought I’d offer the kids a chance to put their face on my body.” He was a cheerleader in college, is a self-dubbed “cool dad,” and has his feelings hurt when his wife Claire doesn’t realize he’s trying to look nice for her. Successful realtor by day and magician, tightrope-walker and inventor by night, Phil’s whimsical, creative side is never put away. Phil loves his dad, his wife and his kids, is not ever afraid to cry and just wants to earn his father-in-law Jay’s respect. He’s impulsive and reckless and always tries so hard. He’s hands down one of the most loving characters, let alone men, on television. Vasectomy or not I hope that nothing ever changes all the soft, fluffy manliness that is Phil Dunphy.

Many words describe me but none more so than activist. I am dedicated to equality of all people and have a special focus on gender issues including reproductive justice, sexual violence, and strategic nonviolent action. END_OF_DOCUMENT_TOKEN_TO_BE_REPLACED
This entry was posted on Monday, July 28th, 2014 at 19:57 and tagged with Cameron Tucker, Jay Pritchett, Luke Dunphy, Manny Delgado, Masculinity, media, Mitchell Pritchett, Modern Family, Phil Dunphy, Television and posted in Sex/Sexuality/Reproductive Justice. You can follow any responses to this entry through the RSS 2.0 feed.
« A Wing & A Prayer
Judgment Day »