An Open Letter to White People

I seriously debated the title of this post, with White Privilege & Cultural Appropriation 101 and How to Not Suck as an Ally both strong contenders. If you can’t tell just how white I am from my avatar I am of the most sunburnable variety. And that whiteness (and of course being cis-gendered), at least in my culture in the United States, brings with it enormous amounts of unearned privilege. If you, dear reader, are wondering what race/ethnicity has to do with feminism and Feminist Activism I strongly encourage you to read this article, and check your privilege at the door. 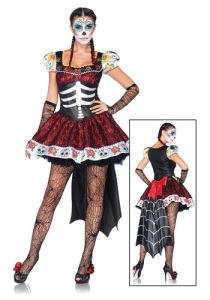 I don’t want anyone to take away from this the us v. them dichotomy that this discussion may be reminiscent of. We are all human, we are all important, we are all deserving of love and respect. I just want to let other white people know that we, white people, are not the “default.” And that we have a responsibility as human beings to be just as aware of other cultures as other non-white Americans are of ours. Check out these links for a refresher on Arab/Middle Eastern, Asian, Black, Latina, Native American and Mixed-race women’s activism in the US. And check out the Other Women’s Blogs listed on the right side of the page for current voices from around the blogosphere.

El Día de L@s Muert@s is what inspired this post, and as Nuestra Hermana points out, it is no substitute for Halloween. Fall is full of celebrations and festivals from all cultures so I encourage discussions of appropriation versus appreciation of Diwali, Hanukkah, and Día de L@s Muert@s in the comments.

The Queen of Salsa!

This year the discussions I had with many of my colleagues, as well as the numerous articles I read about racist, sexist and culturally appropriated costumes for Halloween have really stuck with me. It was a hard but humbling reality when I came to accept that it’s ok if I don’t get to dress up as Celia Cruz for Halloween, because it’s not my culture, it’s not my race and as much as I adore her, my culture has already done so much damage to Afrolatin@ culture that even with the purest of intentions I could never do justice to her because of my race and my culture. There are few downsides to being white so not being able to respectfully emulate someone of another race is something all white people should just accept.

I have made it an official rule: If you are white you do not get to dress up on Halloween (or any other day) as someone who is not white. And just as well, you’d probably end up being offensive anyway. No blackface. No hottentot Venus. Also, no feather headdresses, no geisha or dragon lady costumes, no gypsy fortune tellers, no harem beauties, no “illegal aliens” and don’t associate anything Native American with alcohol. Just don’t. Be respectful, be scary, be creative, just don’t be racist. 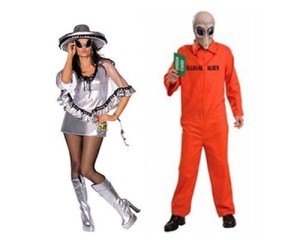 It has taken many years for me to understand my connection to the Latin@ culture. I poured myself into learning Spanish, have lived in Central America, enjoy cumbia and reggaeton, and would gladly eat Mexican food for every meal, and yet I have the privilege of turning off however Chican@ I may feel at any moment, because I am not actually Chicana. It is not my heritage, they are not my ancestors, no es mi lengua propia y no importa como elegantemente puedo communicarme en español, eso no es mío. I am and always will be white, so the stigma Latin@ children face at school for bringing rice and beans and tortillas would never be my reality. The hardship that Latina women face in the US when it comes to safe neighborhoods, fair employment, adequate child care, incarceration rates, health risks and immigration policies will never affect me in the same way.

Again, it has taken me years to learn that the connection I feel to mis herman@s is because of class, not race/ethnicity. I grew up in a trailer park and my best friend was half Mexican, half white. Because we lived in the same park we were subjected to the same disdain by the wealthier kids, but I always felt so at home with her Mexican familia that when I took a Chican@ literature class in college, studied the Nahuatl language and spent time with members of MEChA it seemed redundant for me that my classmates and professors gave me the title of “honorary Chicana.” 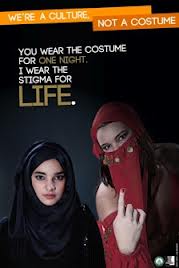 But now I recognize just what an honor that was. I never have been and never will be Chicana, but because I respect and embrace all that Chican@ culture has done for and given to the United States, mis herman@s respect me, and my admiration for their culture, in return. It takes a lot of sincere interest in learning another culture to have members of that culture bestow such a title on you, and it’s something that no one should ever take for granted. I still consider myself very lucky to be able to  understand-both on an academic and a human level-Spanish conversations and Latin@ cultural events when my Latin@ friends choose to include me.

Here are a few tips I’ve been able to put together for those of you who are thinking of participating in another culture’s events or just generally don’t want to be racist:

Thank you for reading, my fellow whities. Now spread the word.

P.S. To my readers who identify as people of color, if I have said anything that is offensive or untrue I beg that you call me out on it so I, and the white people to whom this letter is addressed, can learn from the mistake. Thanks in advance!

Many words describe me but none more so than activist. I am dedicated to equality of all people and have a special focus on gender issues including reproductive justice, sexual violence, and strategic nonviolent action. END_OF_DOCUMENT_TOKEN_TO_BE_REPLACED
This entry was posted on Monday, November 18th, 2013 at 19:48 and tagged with Costume, Dia de los Muertos, Halloween, Racism, Sexism and posted in Race/Ethnicity and Activism. You can follow any responses to this entry through the RSS 2.0 feed.
« Everything’s Bigger in Texas, Except Human Rights
You Might Be a Rapist »

One response to “An Open Letter to White People”