The past month has been a whirlwind here in Texas, with severe, unnecessary and unconstitutional abortion restrictions being shoved down the people’s throat in the SECOND special session of the Texas legislature, to the tune of $800,000, called by our brainless leader Rick Perry. This post is the first in what will be a series describing my personal experiences in fighting for Reproductive Justice in Texas.

HB-1 and SB-2 have been signed into law already. They have four parts that combined make abortion almost completely inaccessible for the women who need them most. The first three parts, barring judicial action, will go into effect 90 days after Perry signed them. The fourth will go into effect in September 2014.

The 20-week “fetal pain” ban has been touted as “reasonable” by some but the current science does not show that a fetus can feel pain at 20 weeks, rather it does show that with very few exceptions, a fetus is not viable outside the womb until roughly 24 weeks. And in a disgusting play of politics Texas legislators refused to consider exceptions for victims of rape or incest or women dealing with “severe mental health issues.” The only exceptions legislators conceded were if the woman’s life was in immediate physical danger (and to be clear, the author of AB-1 doesn’t believe a woman threatening to kill herself qualifies as immediate physical danger,) or if the fetus had such a severe abnormality that it would die within hours or days of being born. This language excludes parents from terminating a pregnancy where the baby would die within a week of being born, of course with the guise of the “health and safety of women” as their house-of-mirrors reasoning.

This new law also requires doctors who perform abortions to have admitting privileges at a hospital within 30 miles of the abortion facility where they would be practicing. This portion of the law is a blatant attempt to restrict how doctors practice medicine with regard to abortion. To earn admitting privileges a doctor must perform a requisite number of surgeries every year which result in a patient being admitted to the hospital for care afterwards. For abortion providers this requirement means they must be working outside the abortion spectrum because abortion has one of the lowest complication rates of any surgery. And the decision of whether to grant admitting privileges to a doctor or not lies solely with the hospital. The doctor has no recourse if s/he is being discriminated against for the type of medicine s/he practices.

Additionally, doctors must now follow the outdated FDA protocol for administering the medications Mifeprex and Misoprostol to induce a medical abortion. As it stood many providers followed protocol approved by the National Abortion Federation, which calls for the patient to receive one pill of Mifeprex in the doctor’s office and then be sent home with four pills of Misoprostol which she would insert buccally (between the lip and gums) 24-48 hours after the Mifeprex. FDA protocol requires a patient to take three Mifeprex in the office and return two days later to insert two Misoprostol vaginally (a practice with higher incidences of infection) before going home to pass the pregnancy. Both protocols require the doctor to urge the patient to return for a follow up exam in roughly two weeks. The differences may not sound severe but FDA protocol would make this process nearly three times more expensive, and with Texas’ mandatory 24 hour waiting period after an ultrasound, would make for four separate days a woman would need to find childcare, take time off work, and drive or be driven to the Ambulatory Surgical Center.

That’s right, the fourth prong of this law would require that even the administration of medications that induce abortions be performed in an Ambulatory Surgical Center. Don’t look for a logical reason behind that one, it absolutely doesn’t exist. In fact, there’s nothing logical or reasonable about anything in this legislation. The physical requirements for an office to be considered an Ambulatory Surgical Center include things like, having both men’s and women’s locker rooms, sterile ventilation systems, back-up generators, painted cement floors and hallways wide enough to spin a gurney. All of which are completely unnecessary to providing safe abortion care. Abortion is already at minimum 10 times safer than childbirth, and women are “allowed” to do that in their own living rooms. This provision alone is likely to cause 37 of the state’s 42 abortion providers to close their doors. And, combined with requiring admitting privileges, has the possibility of shutting down nearly all of Texas’ abortion providers, leaving our vast state with one destination for women who need to terminate, much like Mississippi or North Dakota. The glaring difference, obviously, is the huge size of the state and the overwhelming population of women of reproductive age in Texas. 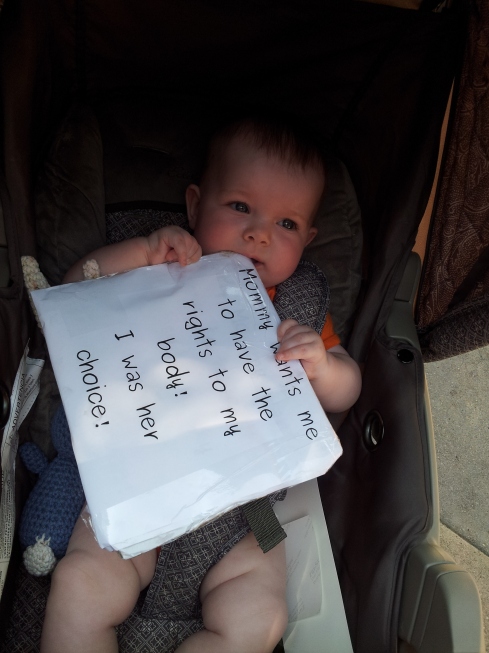 Here are some basic facts on abortion in the United States, just in case you were wondering what about this procedure that more than one-third of all American women experience by age 45 is so scary.

In my next post I’ll get into my experiences at the Capitol. Be good to yourselves, dear readers, and love one another.

Many words describe me but none more so than activist. I am dedicated to equality of all people and have a special focus on gender issues including reproductive justice, sexual violence, and strategic nonviolent action. END_OF_DOCUMENT_TOKEN_TO_BE_REPLACED
This entry was posted on Sunday, July 28th, 2013 at 23:39 and tagged with Abortion, Guttmacher Institute, Mifepristone, Misoprostol, National Abortion Federation, Reproductive health, Reproductive justice, Reproductive rights, Rick Perry, Texas and posted in Sex/Sexuality/Reproductive Justice, Strategic Nonviolent Action, Violence Against Women. You can follow any responses to this entry through the RSS 2.0 feed.
« #OccupyGezi
Tedious Tastelessness in Texas »

5 responses to “Terrible Tragedy in Texas”