The November 2012 election was a cacophonous backlash against the Republican War on Women. While 47,000 women annually around the world are dying from being denied abortions, Americans made it clear that politicians have no place playing doctor. Women and men across the United States let it be known that misogyny and religion have no place in politics–and cast their votes for (and against) some very influential people and laws.

The “Legitimate Rape” Republicans this year saddled the American people with an onslaught of outrageous policies like demanding proof that a disabled rape victim show evidence of physically fighting off her attacker. From suggesting women should be paid less, to not reauthorizing the Violence Against Women Act, to voter fraud, to flat-out denying abortions to raped women in war and raped women soldiers, to the party platform calling for a constitutional ban on abortion, to calling conception from rape a gift from God, to denying birth control on the basis of religion, to claiming breast milk “cures” homosexuality, to making it legal to kill abortion providers the GOP really went off the deep end. The joke has made its way around the internet since November 6th but it’s true: When someone says, “The rape guy lost,” and you have to ask, “Which one?” your party is in trouble. 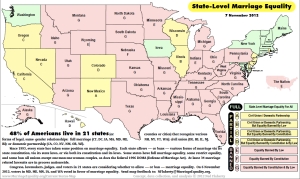 Romney lost not only the debate to women but women cost him the election too. With the last House Democratic hold-out finally signing on to co-sponsor the Respect for Marriage Act in September, Dems were paving the way towards equality in the months leading up to the election. Their commitment to human rights, (including President Obama’s stated support for marriage equality campaigns in Maine, Maryland, Minnesota and Washington, with WA, ME and MD successfully voting for equality), reflects the fact that 51% of Americans support marriage equality. Obviously there’s a long way to go for full equality for the LGBTQAI community since it is still legal in 29 states to fire someone for being gay and legal in 34 states to fire someone on the basis of gender identity, but with 7 LGBT representatives in the 113th Congress at least some states are making progress. 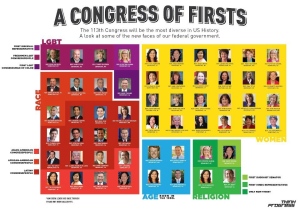 This election was one of many firsts. Wisconsin Democrat Tammy Baldwin is the first openly gay (lesbian) Senator to be elected in US history. Another Tammy, newly elected Illinois Congressional Representative Democrat Tammy Duckworth, a mixed-race double amputee Iraqi War veteran helicopter pilot, has got to be a first as well. She easily triumphed over incumbent Joe “abortion is never necessary to safe a woman’s life” Walsh. Meanwhile in Arizona a shining spot of hope became reality when Democratic Representative Kyrsten Sinema was elected as the US’s first openly bisexual member of Congress. Other firsts include the first Asian-American woman (and Hawai’i’s first woman) Senator, Democrat Mazie Hirono, and North Dakota’s first woman Representative ever, Senate Democrat Heidi Heitkamp. 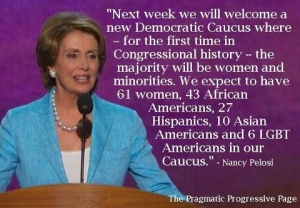 Perhaps most exciting is New Hampshire’s first– the first all-female delegation ever elected! Two female Representatives, two female Senators and America’s only female Democrat Governor make the Granite State one of the most progressive in the nation. New Hampshire serves as a sign of hope that eventually one day gender won’t matter in elections, or in life. But for now gender does matter, and women made up 53% of the electorate in this election, were elected to at least 77 Congressional seats and now serve in 20% of Senate seats– the most ever in US history. Here at Feminist Activism we’re also thrilled that Democrat Elizabeth Warren beat incumbent Republican Scott Brown to the Senate in Massachusetts and that Missouri Senator Claire McCaskill was re-elected and legitimately shut down Tea Party Republican Todd Akin.

As Emily’s List’s Impact Project shows, having Democratic women in office hugely affects the issues that are of most importance to constituents. It’s safe to say that a majority of women in the United States breathed a sigh of relief when Obama’s re-election was announced. Hopefully his Supreme Court Nominees will ensure that we don’t have to worry about Roe v. Wade being overturned in our lifetimes. And with the United Nations declaring access to contraception a universal human right, maybe the feminization of poverty that results from so many unplanned or unwanted pregnancies around the world will start to dwindle.

Despite a lot of rampant sexism throughout the election season there were many shining moments for the advancement of gender equality as well, including the This Is Personal campaign Your Reproductive Health is No Joke and the You Don’t Own Me PSA. If you want to keep up pressure on our government and ensure that access to safe, legal and affordable birth control and abortion are protected, draw the line and sign the Center for Reproductive Rights’ Bill of Reproductive Rights, and tell President Obama to protect women’s reproductive health! Keep up the good fight voters, let’s have the next Democratic Convention in Denver!

Many words describe me but none more so than activist. I am dedicated to equality of all people and have a special focus on gender issues including reproductive justice, sexual violence, and strategic nonviolent action. END_OF_DOCUMENT_TOKEN_TO_BE_REPLACED
This entry was posted on Thursday, November 29th, 2012 at 21:14 and tagged with Abortion, Politics, United States, Violence Against Women Act and posted in Sex/Sexuality/Reproductive Justice. You can follow any responses to this entry through the RSS 2.0 feed.
« International Day of Nonviolence
The Gendered Privileges of Emotions »