40 Days of Hate and Hypocrisy

My recent move back to the United States has brought me full circle and I’m working again for the same abortion provider I was when I left the US three years ago. Counseling women in a time of need, helping women navigate the personal and political ramifications of abortion, and standing up for reproductive health and human rights is the most fulfilling thing I have ever done. Abortion rights are under vicious attack now in the United States and anyone who cares about personal liberty has a responsibility to vote out the conservative radicals this November. Al Jazeera takes an interesting look into the world of abortion protesters here.

Conservative, religious radicals are out in force across the nation and even liberal cities like Austin, Texas aren’t immune to the invasion of privacy and emotional blackmail of anti-choice protesters. At least in Austin Crisis Pregnancy Centers or CPCs are required by law to clearly state that they are not medically licensed and will not provide abortion care. Unfortunately their offers of free pregnancy tests, ultrasounds and counseling still lure in patients seeking abortion… and their lies and manipulation do a lot of harm in delaying or even preventing women from exercising their choices. This past Wednesday, September 26th, a group called Austin Coalition for Life began their 40 Days for Life “prayer vigil” outside Austin abortion clinics, getting good-hearted church-goers to sign up for one-hour shifts to stand outside our office and intimidate our patients.

This action, by this group, though peaceful, has already and will cause even more unnecessary stress, fear and heartache for women making one of the most difficult decisions of their lives. The hypocrisy is overwhelming. Even some patients who identify as being religious tell us “I don’t believe in abortion,” and yet there they sit. A few protesters a few times a week is normal for us but multiple protesters everyday for 40 days (until November 4th!) is exhausting. Having to warn patients that their decisions, their bodily autonomy and their health are going to be disrespected by people who feel entirely justified in forcefeeding their faith to others makes me wince. Hearing angry fathers threaten violence against protesters for upsetting their daughters makes me nervous. Seeing posters that try to coerce vulnerable young women into becoming ill-prepared parents makes me nauseated. Reading about the “And Then There Were None” project to syphon abortion clinic employees into religious CPCs makes me dizzy. Imagine the additional trauma these “people of god” are causing to already scared, hormonally volatile women–women who are confident in their choice that this is not the right time for them to bring life into this world through their own bodies.

Some patients get angry and do verbal battle with protesters, asking if they’ll come to their home at 2 AM to feed and change the new baby. Others come into the office crying after being harassed by a protester yelling, “Mommy don’t kill me! Your baby loves you!” Sometimes patients talk to them, listen to their gospel, accept their literature and still have abortions. A few laugh them off and ask us who has the time. Most patients just ignore them, which is what all of us who work there must do. But for me, as an atheist, someone telling me they are praying for me to have a change of heart just makes me shake my head. Who are you to judge my patients and tell anyone what to believe?

What this group in particular and all other “religious and peaceful” anti-choice protesters do not understand is that their silent prayers, sidewalk counseling and general anti-choice stance lead the way for and justify the beliefs and actions of those anti-choice activists who feel that violence is the answer. In the same way that telling (or not speaking out against) a rape joke perpetuates rape culture and allows any rapist who might overhear it to feel that his actions are normal and acceptable, a violent anti-choice activist is bolstered in his beliefs when he sees dozens of protesters outside an abortion clinic who he feels are on his side. Dr. George Tiller of Kansas was murdered by one such extremist who felt that god wanted him to kill this doctor to prevent abortions.

According to the Guttmacher Institute in 2008 there were only 1,793 abortion providers in the entire United States, a drastic drop from 2,908 in 1982, largely due to threats of violence and absurd political restrictions. A bomb was planted at the office where I work a year before I started there. Everyone who worked there at the time returned the next day. Because of extremist anti-choice groups like Operation Rescue I fear for my life everyday when I go to work. Yet every day I go to work I am confident that I am doing the right thing by helping my patients access safe abortions. Roe v. Wade wasn’t the start of women in the US having abortions, it was the end of women dying from them.

I’m helping provide a medical service to women, one that is unremarkable in some places but is demonized and dehumanized in the US. The political climate in America now is so disgustingly misogynistic that a medical procedure that a full third of all women undergo by age 45 is barely ever discussed openly between friends, let alone honestly and on a personal level in public. The secrecy surrounding abortion and the fear many women live in is directly related to the guilt and shame being piled on by the religious right–the same people who want to restrict access to birth control, discontinue Welfare and Medicaid, and teach abstinence only! Protesters both peaceful and violent alike are given confidence when they hear prominent Republican politicians spewing phrases like “legitimate rape” and threatening to overturn Roe v. Wade and “get rid of” Planned Parenthood. 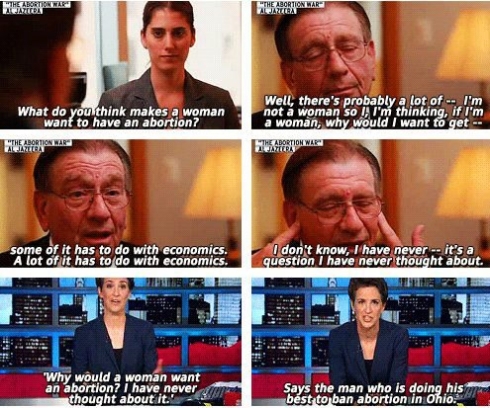 Infuriatingly, the politicians who are trying their damnedest to eliminate access to abortion “have never thought about” why a woman might consider it. In the same vein, most Americans who claim to want abortion to be illegal have no answer when asked how women who obtain abortions illegally should be punished. These people are playing politics with people’s lives and shaming them for making the best choices for themselves AND THEY’VE NEVER EVEN THOUGHT ABOUT THE CONSEQUENCES!!!

My co-workers and I have 37 more days of “life” to get through but networking events like this week’s Jane’s Due Process appreciation mixer, and the upcoming NARAL Pro-Choice Texas 26th Annual Celebration of Choice event definitely make it easier on us. Want to help change the reality of abortion politics in the US? Donate to NARAL Pro-Choice America and Planned Parenthood. Click here to tell your representatives that women won’t go back to back alley abortions! Register to vote and then VOTE like your lady parts depend on it… because they do!

Many words describe me but none more so than activist. I am dedicated to equality of all people and have a special focus on gender issues including reproductive justice, sexual violence, and strategic nonviolent action. END_OF_DOCUMENT_TOKEN_TO_BE_REPLACED
This entry was posted on Friday, September 28th, 2012 at 23:24 and tagged with Abortion, Guttmacher Institute, Reproductive health, Reproductive justice, United States and posted in Sex/Sexuality/Reproductive Justice, Violence Against Women. You can follow any responses to this entry through the RSS 2.0 feed.
« What I Learned From DFA
International Day of Nonviolence »

5 responses to “40 Days of Hate and Hypocrisy”