The War FOR Women 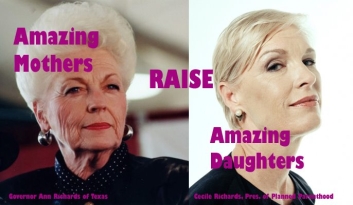 Soon I start a six-week online training course designed to teach Americans more about how to defend women’s human rights against the egregious attacks against women’s health, sexuality and autonomy coming from right-wing politicians. Democracy For America has organized the War FOR Women training sessions which will all take place virtually, once a week, at 8pm Eastern (5pm Pacific). Topics include practical rebuffs to the attack on reproductive justice, lobbying techniques to stop violence against women, how to address pay inequality in your community, how to get the media to cover your story (VERY important for the success of strategic nonviolent action!), how to register voters and encourage women to exercise their hard-earned right to vote, how you can be a successful political candidate and how to get out the vote.

The schedule is as follows:

I am thrilled to be inhabiting the same virtual space as Cecile Richards, one of my personal heroes, as she explains “what’s at stake for women’s health nationally and in particular states where dangerous legislation is being considered. Deirdre Schifeling, Planned Parenthood’s National Director for Organizing & Electoral Campaigns, will provide a practical training on how you can join the fight.”

I will blog about the trainings and what I am learning over the next six weeks. If you’d like to join Democracy For America will “show you how you can challenge the GOP’s attack on women and build a movement for equality.” Register here for seminars that will “provide practical tools and create a community of people of all genders committed to fighting for women’s rights. Each session will feature leading experts on each issue, a practical training on how you can take action, and a chance to connect with like-minded people who refuse to be silent in the face of injustice.” What more can you ask for?

Many words describe me but none more so than activist. I am dedicated to equality of all people and have a special focus on gender issues including reproductive justice, sexual violence, and strategic nonviolent action. END_OF_DOCUMENT_TOKEN_TO_BE_REPLACED
This entry was posted on Tuesday, July 10th, 2012 at 11:25 and tagged with Activism, Cecile Richards, Reproductive justice, Reproductive rights, United States, Women's health and posted in Sex/Sexuality/Reproductive Justice, Strategic Nonviolent Action, Violence Against Women. You can follow any responses to this entry through the RSS 2.0 feed.
« The Republican War on Women
What I Learned From DFA »