April 17th is Equal Pay Day in the United States. Equal Pay Day marks how far into 2012 women have to work to earn what men did in 2011. See this graph by the Atlantic for an exploration of the pay gap by area of expertise, and the National Women’s Law Center’s and the American Association of University Women’s state-by-state fact sheets and rankings about the wage gap. 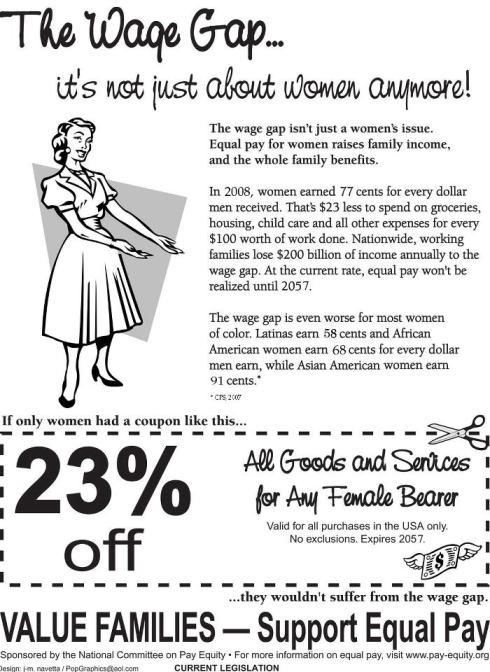 Women on average only earn 77 cents for every dollar a man earns. It’s even more grim if you are a women who happens to not have white skin: African-American women earn only 62 cents and Hispanic women only 54 cents for every dollar that a white, non-Hispanic man earns. The Labor Council for Latin American Advancement and it’s Trabajadoras Campaign can help if you feel you have experienced wage discrimination. Their informative report on the status of Latina workers in the US is available for download on their site.

In case you were wondering what the extra cost of being a vagina’d-American is, here’s a rough estimate compiled by Jezebel. It doesn’t include the cost of treating vagina-specific sexual health issues like bacterial vaginosis or PID which can be quite costly, but hey, nobody’s perfect. Also chech out this chart explaining how much more women pay for health insurance by state, unfair right? Especially when you figure out that the average tax cut per millionaire in 2012 could support 551 people receiving family planning services. And just think, with the extra $431,360 you would earn over your lifetime if you were a penis’d-American, you could pay for SEVEN four-year college degrees, or 921 abortions.

Besides abortion and birth control issues, one important battlefront in the War on Women is the Republican Party’s denial that the wage gap exists. In Wisconsin Governor Scott Walker, in a stunning display of inhumanity, repealed that state’s equal pay law because, as Senator Glenn Grothman (R-Wis.) explained, “Money is more important for men.”

Senator Grothman asserts that women are too busy caring for children to fret their pretty little heads over financial woes. His archaic assumption leaves most American women out of the equation, including single women, women without children, and all women-headed-households, including the 34% of women-headed-households that live below the poverty line. For many of these families there is no help coming from the government since they do not meet the strict criteria for Welfare.

At least one TV figure has asked the GOP why they don’t pay women for mothering since being a mother is work. Being a mother is arguably the worst financial decision a woman can make in the US but many women like Selma James have worked for decades, fighting for women to be paid for the work they do in the home.

One of the best things you can do to put an end to wage discrimination, besides demanding a wage equal to what your male peers are making, is to demand your lawmakers enact the Equal Rights Amendment. As always your questions, comments, links or other addicting info are more than welcome and very much appreciated in the comments.

Go forth and equalize!

Many words describe me but none more so than activist. I am dedicated to equality of all people and have a special focus on gender issues including reproductive justice, sexual violence, and strategic nonviolent action. END_OF_DOCUMENT_TOKEN_TO_BE_REPLACED
This entry was posted on Tuesday, April 17th, 2012 at 22:13 and tagged with Discrimination, Equal Pay Day, Equal pay for equal work, Pay Equity, Reproductive justice, United States, Wage Gap and posted in General Information, Strategic Nonviolent Action. You can follow any responses to this entry through the RSS 2.0 feed.
« Women’s History Month 2012
International Day Against Homophobia & Transphobia »

One response to “Equal Pay Day”