Misogyny and Masculinity in the US Military by Jacob Steele

Don’t Ask, Don’t Tell has been repealed. So we are now allowed to be as misogynist and violent as they are. Well, good job. We can now hate women and outside cultures as good as the next man. Just don’t call me “fag,” or I’ll kick your fuckin’ ass.

We’re now allowed to serve the military machine, the clearest and finest example of patriarchy our country has to offer. Is this really a step forward? African-American men were allowed to serve in all specializations some time ago. Women of all races could serve fully in 1981 (just not in combat, because women can’t kick ass or take names like a man can). And now women and men of whatever sexual orientation, in 2011. Have those oppressed groups that went before us, integrating into the military, changed the institution from the inside? Have they made it a less oppressive, less violent expression of the hegemonic masculinity? Or have those souls who have already been admitted only been subverted into that masculinity themselves?

Fully a third of military women will be sexually assaulted or raped during their time on active duty. Of those, a mere 8% of their assailants will be brought up on charges, and basically none of those that are actually charged will be convicted or face penalties stronger than a short-term pay cut. And this is how we treat our own soldiers! Imagine what happens to those that are labeled “enemy.”

But this is the institution that we can now serve, outly and proudly. As this bill—the culmination of years, even lifetimes of work on the parts of many of us—goes into effect, it’s past time to think about what we’re asking for when we ask to be part of the old boys’ club. What exactly will membership get us? And what, precisely, is the price of that membership card?

The answer already seems clear. From the personage of Lt. Dan Choi, who was the de facto figurehead of the movement until the bill was passed earlier this year, to the ongoing efforts of Human Rights Campaign (HRC), the main thrust of the movement has been to prove that gay men and lesbians are just as good, just as hard, just as military, as their heterosexual counterparts. Lt. Choi, for example, once challenged a friend of mine to a push-up contest at a speaking event—but the self-styled leaders of our movement lack a critical lens at much deeper levels than this sort of machista bravado.

The masculinity that dominates the military and seeps into every aspect of our culture is itself pathological and destructive. This is borne out statistically, as above, and anecdotally, by thousands of stories of men soldiers’ violence against their wives and girlfriends, against women soldiers, and against other men. By pushing so hard to have the same rights that those straight white men take for granted, we have underplayed our hand. The question has not been and should not be “How can we get the same rights as them?” but “How did they ever get the right to rape, to batter, to destroy?”

Hopefully, the LGBTQ movement entering openly into the military will shed light on the fact that, right now, military men (and many non-military men) have those rights—rights which no one should ever have or want. Hopefully, our serving in the military will change the masculinity displayed by so many military men into one that is less violent, less misogynistic and (more obviously) less homophobic.

I fear, however, that our military service will only make those that are serving more violent, while the institutions we serve gain an air of “tolerance” and openness. I fear that gay men and lesbians will come to be seen as “normal” not because of an embracement of diverse sexuality in the public sphere, but because gay men and lesbians serving in the military will become closer to the norm—that is, violent and misogynistic. It’s up to us to not let the repeal of Don’t Ask/Don’t Tell (and, soon, Defense of Marriage Act) be the end.

It’s up to us to keep living and discovering and activisting a new masculinity, to keep calling out, in the streets and in the courts and in our homes, the pathology of the dominant masculinity. And it’s up to us to explore, become, and teach ways of being men that exclude violence as a legitimate way of interacting with our world in the day-to-day, and certainly, at the least, exclude perpetrating sexual violence in any of its myriad forms. It’s up to us. 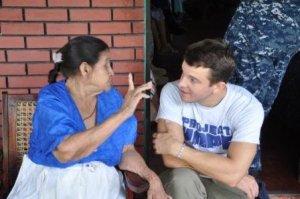 Jacob discussing life with una vieja in a 'retirement home' in Nicaragua as a member of the NGO Project HOPE, where he a group of sailors from the hospital ship USNS Comfort and other civilians were doing maintenance to the infrastructure of the retirement home

Jacob Steele is a former Navy Officer and veteran of Operation Enduring Freedom. He holds a Master’s degree in Media, Peace and Conflict studies from University for Peace, Costa Rica, and is currently rediscovering his native United States by motorcycle, bus, and car. He is 29.

Many words describe me but none more so than activist. I am dedicated to equality of all people and have a special focus on gender issues including reproductive justice, sexual violence, and strategic nonviolent action. END_OF_DOCUMENT_TOKEN_TO_BE_REPLACED
This entry was posted on Saturday, December 10th, 2011 at 22:53 and tagged with Civil and political rights, Militarism, Politics, Sexuality, Violence against women and posted in Guest Author, Sex/Sexuality/Reproductive Justice, Violence Against Women. You can follow any responses to this entry through the RSS 2.0 feed.
« Man Up! by Göktuğ Salgırtay
Welcome to 2012! »