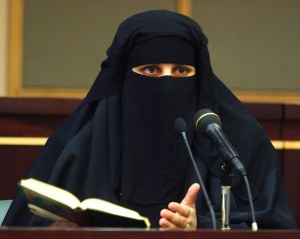 France has certainly stirred up quite a storm with their recent enforcement of a ban on the niqab, one version of the hijab that covers the face, in addition to the hair. Women who cover their faces in public will be subject to fines and citizenship lessons. While everyone has an opinion, finally including Muslim women in the debate over niqab/hijab is a huge first-step to overcoming the political wedge being driven between courageous women on both sides by right-wing groups.

As stated previously, women’s identities occur ”in the context of a racist, classist, sexist society which places greater value on people who are fully able-bodied and young. Our personal experiences often parallel the experiences of women with whom we identify…. When we foster discussion as to who is the most… oppressed, we encourage the colonialist tactic of divide and conquer.” (Shah, Sonia. 1997. “Women and Gender Issues” http://www.asian-nation.org/gender.shtml). All women must first listen to each other, and then come together to support each other’s rights. 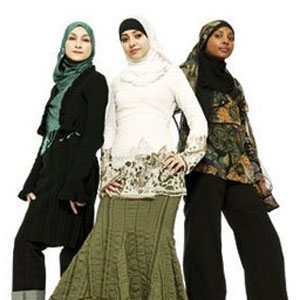 There are many, many things to consider when discussing hijab, the principle of modest dress in Islam, including the fact that observant men are also expected to dress modestly, how laws regarding expression of religion will affect various women, and why women wear outward expressions of religion in the first place. Many Islamic scholars argue that the niqab is a cultural relic and not a true observance of Islam, which adds another layer to the debate.

As an Atheist and someone who is uneducated about the world’s religions, I do not like to discuss the topic; as a feminist and someone who is concerned about every individual’s right to express her/himself, I will now delve into the common principle of modest dress found in the three Abrahamic faiths. 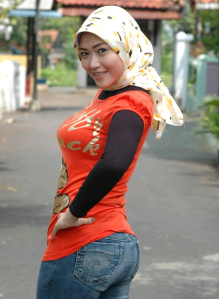 One of the many things Islam, Christianity and Judaism have in common is the principle of modest dress. Each of these three major religions also has followers the scale the spectrum from excruciatingly devout to merely a follower in name alone, and their outward expressions of their faiths reflect this. Here in Turkey, because a religion is strongly encouraged to be included on the birth certificate of a newborn, many parents state that their children are Muslim, with no intention of ever stepping foot in a mosque. Consequently some young women whose families force them to cover their hair rebel by wearing lots of make-up and tight “Western” clothing too. Likewise, many American families are “Christian” but do not attend church or actively practice the religion. This is to say nothing of those people, in any faith, who practice their faiths only in their houses of worship and are bad people everywhere else. 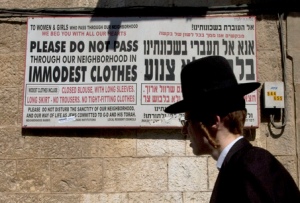 In Judaism the principle of Tzniut requires Orthodox men to dress modestly (no short-sleeved shirts or shorts) and women to cover from their collarbones to their elbows to their knees, not wear open-toed shoes or pants, wear demure colors, clothing that does not show their shape, and, if they are married, to cover their hair. Because many married Orthodox Jewish women often cover their hair with wigs they are perceived as less “frightening” than Muslim women who wear a headscarf. Jewish men too are expected to dress modestly and cover their heads out of respect for God. 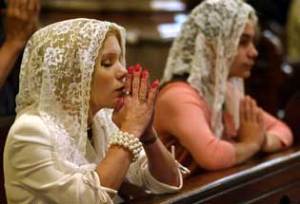 Anyone who has ever been to Catholic school can tell you that nuns are scary. And while the habit is not required of regular practitioners of Catholicism, the only women allowed to serve as authorities under the Catholic Church are required to wear black, shapeless dresses and cover their hair. Other branches of Christianity also encourage modest dress, with some practicing women not allowed to wear pants or show their figure. Also the Amish, the Mennonites, and the Dunkard Brethren, among other Christian denominations, require simplicity and modesty in the dress, including head covering, of all followers.

While many of the world’s religions require followers to cover their heads, rarely is covering the face a requirement, and if it is, it is only required of women. In Catholicism women were expected for centuries to wear a veil in church, the difference here being that in Islam women are encouraged to hide themselves from unrelated men, and in Catholicism, women are encouraged to hide themselves from God. I am a fan of neither of these ideas.

Unfortunately, these major religions, Islam, Christianity and Judaism, are all patriarchal in nature, with women’s voices traditionally being left out of the “written word of God.” Of course there are examples in each of the holy texts, the Qu’ran, the Bible and the Torah, of messages of love and peace and equality, but there are also a number of passages which promote violence or revenge or inequality. Interpretation is key to utilizing the idea of a loving God to promoting human rights, including the rights of women. 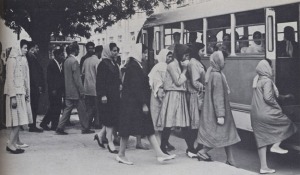 Oddly, both sides of the niqab ban debate claim to have women’s rights in mind. I find it sad, if laughable, that politicians and religious leaders alike raise the banner of women’s rights only when they have no other excuse for their actions (ie. Let’s invade Afghanistan to “liberate their women!“) If either the French government or the Islamic leaders in this debate were truly concerned about women’s rights, especially Muslim women’s rights, they would have been speaking out long ago about the racism, sexism and socio-economic disadvantages Muslim women face in Muslim and non-Muslim countries on a daily basis, to say nothing of opposition to war and drone attacks.

FEMINISTS have been speaking out against the mistreatment of women, Muslim and non-Muslim alike, for decades, and yet our pleas for governments to change laws that truly can affect women’s lives have gone unnoticed. Muslim women’s groups and Islamic feminists have also been speaking out about the issues of concern to them… obviously their voices too go unheard since “veiling” is not usually amongst their biggest concerns. Poverty, education, healthcare, democracy, unemployment–these are the rights Muslim feminists are demanding. We cannot diminish their real needs by imposing our ideologies onto them.

Now, one of the most important ideas I learned in graduate school was this: Cultural relativism is one step away from racism. Let me explain. By excusing away some particular behavior as “cultural” we are condoning/allowing it and claiming there is no room, need or ability for change. “[Insert any race/ethnicity here] men beat their wives… but it’s part of their culture. Those people only send their children to school for two years… but it’s part of their culture.” These ideas are inherently the same as blatantly racist statements like “X people are stupid.” Thankfully we do cry out when culture/religion are used to torture and kill people- as in the picture above, but this retroactive lamenting of “cultural practices” still does nothing for the women being killed for being raped. 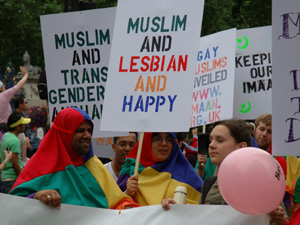 There are fundamental human rights that every individual on the planet should have access to. In my mind those (should) include: education, healthcare, food, water, shelter, clean air, the right to vote, economic opportunity, the right to form legal bonds, and freedom of speech, movement, assembly, demonstration, physical expression, sexuality, and yes, religion. Of course age and issues of consent arise with such things as sex and voting, but these are still fundamental rights. 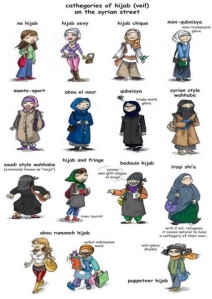 I fully appreciate the arguments that many women do not really have a choice in wearing the niqab, that the niqab disappears women and takes away their individuality, that outward expressions of religion have no place in government offices or schools, and that in the name of security one’s face should not be hidden. I also appreciate the arguments that telling women what they cannot wear is just as oppressive as telling them what they can wear, that the niqab/abaya allows women to be appreciated for what they say and not how they look, that freedom of religious expression is a fundamental human right, and that not all Muslims are terrorists! 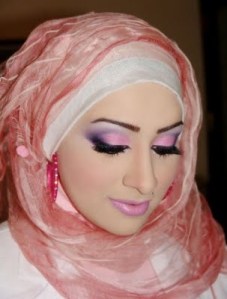 ALL WOMEN ARE JUDGED ON OUTWARD APPEARANCE. Women who wear hijab understand this as much as any woman, and sometimes choose to wear hijab out of rebellion against colonialism/government oppression/imperialism etc. Whether or not women are judged as being sexy enough for marriage material in the West or pious enough for marriage material in the East, what women wear is under constant scrutiny by other women, men, and society in general. Adopting standards of modesty specific to women objectifies women as much as encouraging women to show off does. In both cases women are to be seen, and then their worth determined.

Obviously my mind is not made up as to whether or not the ban is ethical/legal. My biggest concern with the ban, however, is the isolation it is likely to cause. Essentially, the French government is saying, “Either remove this expression of your religion (culture), or stay home,” further widening the chasm between the public and private spheres for women. Another of my concerns with the enforcement of this ban is class issues: French Muslim women who wear niqab will be fined or required to take classes in French citizenship, and the government of France is basically telling the women of the Gulf States, where niqab is the law, that they are not welcome unless they are willing to endanger themselves.

What is needed in this case is not a band-aid solution to the gaping wound that is women’s inequality. To tackle the underlying causes of why men and women are held to different standards in any situation we must start deconstructing socially constructed gender roles in every society. This is hard, dangerous work, but until women are no longer seen as property to be protected from the eyes of lustful men, (and the eyes of lustful men are rightly shamed into looking at their own feet!) we must educate ourselves and anyone who will listen as to the necessity, for men and women, in abolishing strict gender roles. 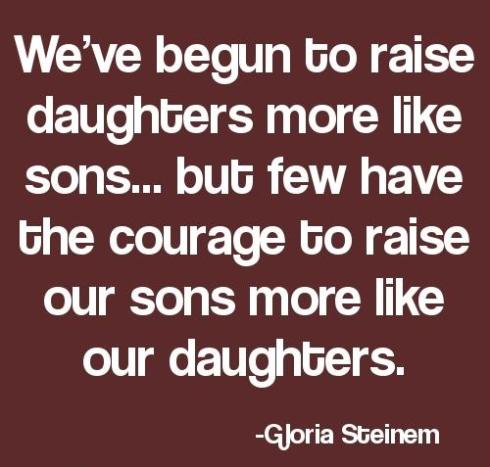 Many words describe me but none more so than activist. I am dedicated to equality of all people and have a special focus on gender issues including reproductive justice, sexual violence, and strategic nonviolent action. END_OF_DOCUMENT_TOKEN_TO_BE_REPLACED
This entry was posted on Thursday, April 14th, 2011 at 16:45 and tagged with Appearance, Catholic Church, Christianity, Gaze, Gender, Gender equality, Gender roles, Hijab, Islam, Judaism, Justice, Modesty, Muslim, Niqab ban, Public/Private, Religion, Women in Islam, Women's rights and posted in General Information. You can follow any responses to this entry through the RSS 2.0 feed.
« Day 31- Connecting the Dots
Socially Constructed Gender Roles: The Root of All Evil »

15 responses to “Religion and Modest Dress”

Leave a Reply to Where Are the Women? | In Women's Hands Cancel reply