Women all around the world are at risk for violence.

Violence is often inflicted on women by men they are close to such as fathers, husbands, brothers, uncles, or boyfriends, but lesbians and transgendered people around the world are at risk of assault and sexual violence everyday, just because they exist. And while violence within LGBTQAI relationships is often overlooked and covered up, lesbians are not exempt from domestic violence. 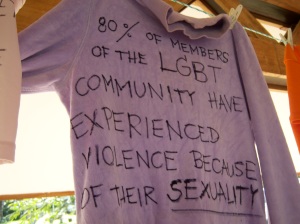 Another vulnerable group of adult women are elderly women, both in retirement homes and out. Elder abuse can take many forms, from neglect to homelessness and widows in many countries are even more vulnerable. This week we will not tackle child abuse as a separate topic but look at the various ways in which girl children are specifically targeted for abuse and victimized by incest.

The Clothesline Project: I had witnessed the power of the Clothesline Project as an undergraduate student at San Diego State University. The personal messages written on old shirts at first are overwhelming and bring a sense of sadness and dismay, then you see the messages of hope and triumph written by women who have learned to overcome their own personal tragedies.

The first (and to-date only) Clothesline Project I have personally taken part in was last year at the University for Peace. All of the photos in this post are from that event. I cannot explain how empowering it was to share my own stories of abuse and support other women in their own healing processes.

Many groups that arrange Clothesline Projects do not allow men to write shirts but when asked by a classmate’s father if he could create a shirt to honor his sister who had been murdered by her boyfriend in front of her eight-year-old son, there was no way I could exclude men from our project.

Men and boys are also deeply affected by violence against women, and this project is a good cathartic opportunity for them to realize they have a community of people with whom they can share their stories and show their support to others who have faced similar challenges.

If you are interested in creating a Clothesline Project in your neighborhood to send a message of support to victims of violence, and defiance to perpetrators, see the original creator’s website.

For our project, we first raised money to buy shirts from a second-hand store. Because our student community was very international and would only be in Costa Rica for a year, most of us could not afford to part with the few articles of clothing we had brought with us.

At the store I purchased roughly 70 shirts of various solid colors. We used black permanent markers to share our stories and so some materials are better than others.

The color scheme of CP is broken down this way: Grey for verbal abuse, yellow and orange for physical violence, red and pink for rape and sexual assault, blue and green for child abuse, purple for violence against the LGBTQAI community, and white for murder.

From there we set up a quiet table, put pieces of cardboard in between the fronts and backs of the shirts so the markers wouldn’t bleed through, and started sharing our stories. We wrote the year on the hems of the shirts to keep track of them. We encouraged everyone to write in their native languages (our students came from 60 countries) and then we taped a typed translation onto the front of the shirts.

Because we were in a Spanish-speaking country, Spanish speakers were encouraged to write in Spanish on the front and English on the back. The idea was to eventually display the whole collection, with everything translated into Spanish, for the people of the town nearest our campus. While our class was never able to arrange this, we left the shirts our class made with the Gender & Peacebuilding department in hopes that this year’s class will add their stories, and continue our work.

The shirts were displayed for a week around the covered outdoor cafeteria area so that people could not ignore our message. The first day, during lunch, the display was accompanied by a soundtrack to make sure people were aware of how pervasive violence against women is. I created a soundtrack of a low-flying jet, a car alarm, and an air raid siren, which sounded every 13 seconds, every 2 minutes, and every 15 minutes, respectively. The jet symbolizes how often a woman is subjected to physical violence, the car alarm shows how often a woman is raped, and the siren alerts people to how often a woman is murdered in the US.

The event is emotional so if you are taking this on, be prepared for tears, confusion, and some very uncomfortable moments as people who think they don’t know anyone who has been victimized come to realize that no one’s safety is guaranteed.

Any event that raises awareness and gets people talking about such a taboo subject is a worthwhile nonviolent action. Together, we can overcome violence against women.

Many words describe me but none more so than activist. I am dedicated to equality of all people and have a special focus on gender issues including reproductive justice, sexual violence, and strategic nonviolent action. END_OF_DOCUMENT_TOKEN_TO_BE_REPLACED
This entry was posted on Tuesday, March 15th, 2011 at 19:35 and tagged with Activism, Clothesline Project, Costa Rica, Domestic violence, University for Peace, Violence against women, Women's History Month and posted in Violence Against Women. You can follow any responses to this entry through the RSS 2.0 feed.
« Day 14- Women’s Activism in North America and Oceania
Day 16- Denim Day Movement »

3 responses to “Day 15- The Clothesline Project”